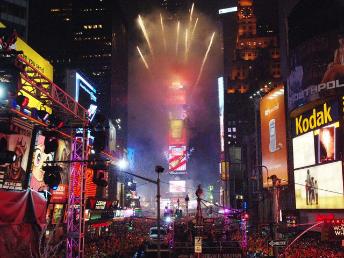 “If you want to live a happy life, tie it to a goal, not to people or things.”

SOUTHFIELD, Mich. — So here we are. It’s December 31. The FINAL day of the year. Where the f— did 2010 go? I know what you are thinking: “Great! This asshole is going to give us a rundown of everything that he thought happened in 2010 and will give us his take. Ugh, I’m tired of that shit!” Well, much to your delight, I too hate those GAWD-awful “Year In Review” piles of feces that start cropping up shortly after you’ve just finished eating Thanksgiving dinner. So no, this is not some ridiculous 2010 Year in Review blog. Nor is it a blathering piece on New Year’s Resolutions. I despise those too. No one ever sticks to the damn things. You vow to quit smoking. You vow to lose weight. You vow to quit swearing. By Jan. 15, you’re sitting in your car outside of Mickey D’s eating a McRib, smoking a square, and saying “Fuck it”. This blog, the final one of 2010, will not speak of any of that nonsense. It will lay out what I plan to do in 2011. I am not making resolutions, I am setting goals. Resolutions are for dreamers. Goals are for those who are trying to get things done. Let’s Go.

I would be remiss if I didn’t acknowledge a few of the things that were accomplished this year. In no particular order: Getting a piece published in Real Detroit Weekly, going 9 months without eating at McDonald’s, losing 30 lbs and going on a stiff workout regimen, getting over a major fear and getting on a plane for the first time in 16 years, attending my first NABJ Conference in San Diego, attending my first Phi Beta Sigma regionals in Louisville, getting the majority of my grad classes at Wayne State done and sitting six credits shy of my Master’s Degree, interning at WDET, and taking over as Sports Editor at the South End and being able to cover the best season of Wayne State Football ever. These are all things that I am proud of. I didn’t sit my ass down at this table a year ago and “resolve” to do any of this. I just did it, and so can you. Looking at 2011, I have a few preliminary goals that I have set for myself. My success in 2011 and beyond is basically contingent on achieving at least three of these goals. The number in parentheses is the degree of difficulty of each goal, with one being the easiest and five being the most daunting and difficult. I would suggest you do something similar with whatever you REALLY want to get done.

1. Graduating from Wayne State, finishing my Master’s Degree in Journalism (3): I first entertained the idea of going to graduate school in the tumultuous summer of 2006, in the wake of the news that 96.5 was being sold and I was convinced that I would be fired when MacDonald took over (in retrospect, I wish I had been). I didn’t apply until the summer of 2007, after I had quit 96.5 in June. Wayne State was the best option because MSU was out of the picture, and I wasn’t going to get into Central Michigan or Northwestern with my sorry-ass grades from undergrad. Hell, I had to basically plead my case to the head of the department to get them to accept me . My plea worked, and after a hellacious class to start things in May 2008 (ironically, my first day of class was the 5-year anniversary of my Michigan State graduation), I have plowed through my course load with a GPA of 3.5. Not bad for someone who was barely able to muster a 2.5 at MSU. When I entered Wayne State, the objective was to be out of here by 2011. As of right now, I am six credits away from finishing. Meaning it’s 1st down and Goal to go from the 6-yard line. The reason this is a 3 is because I have an “essay” (don’t you dare call it a Thesis!) to go with one more class. Couple that with my basketball schedule and it will not be an easy pull. But it can and WILL be done.

2. Getting a FULL-TIME gig as a writer and/or broadcaster (4): I have had one full-time gig as a broadcaster in my life. It was that horrific six-month run as Midday host in Lansing at 96.5. Every day I was there was Hell. EVERY DAY. If it weren’t for the amount of resolve I had, I’d have quit after 2 weeks. Plus, I truthfully feel that I had not earned that gig, and was set up to fail by management. That was 3½ years ago. It’s time for a change. I have worked my ass off the last three years to put myself in the position to get a job at some sort of reputable newspaper or radio station. The reason I treat every story I write for the South End like it’s in the New York Times is because I want to go above and beyond the normal College story. Contrary to what a certain individual who is no longer in my life thinks, this writing shit is no hobby. It is an art form. Furthermore, this is my life. In terms of broadcast, one of the best experiences I had in radio came at WDET. The atmosphere was the antithesis of what I’d dealt with prior to getting there. Yes, I know public radio is fundamentally different from commercial radio, but who says the people can’t be genuinely good people in all forms. The major league hang-up in all this, and why the degree of difficulty is so damn high, is because of the economy and competitive nature of this business, it is damn near impossible to get a job w/out really impressing people or stumbling into the perfect situation in Michigan, so relocation is on the table. It’s not the easiest thing to pull off, but if it was easy, it wouldn’t be worth it. Whatever the case, I’ll be damned if I’m broke and struggling for money on 12/31/2011.

3. Getting out of the shadow of Lansing (2): Just a few hours ago, I was listening to the tapes (yes, tapes…we’ve been over this before…) of one of my SNL shows from 2006. It was from July 15, 2006 to be exact. I was just 26, full of piss, vinegar, and Mountain Dew. I talked a thousand miles a minute, played basically whatever the hell I wanted, was a freak of nature on a production board, and had the city in the palm of my hand. I still get an adrenaline rush listening to those shows. The problem with this is that while I loved the positive vibes and the memories of those shows, the last time I did an SNL show that mattered was Sept. 30, 2006. My first day in radio was Jan. 5, 2005. That’s almost six years ago. As much as I loved that time period in my life, I’m not the 25-year-old rookie with a head full of hair and big ideas anymore. I’m not gonna let WQHH become to me what Polk High was to Al Bundy. That’s why Goal #2 is so important. As much as I loved my time in Lansing, I refuse to let SNL be my one indelible mark.

4. Take Time to Myself and Travel (4): This year I went to San Diego (through Houston) to go to NABJ 2010. I drove from Detroit to Louisville for Sigma Regionals. I made a trip to Chicago for a weekend, and took a couple trips to Ohio on business. This coming year has NABJ in Philadelphia, Conclave in Atlanta, plus I have friends in Chicago and on the west coast I would love to visit. One of the reasons I have been so distant from, well, everything has been because I have had no time (nor money) to really relax and enjoy myself. My life has been a pressure cooker since 2006. That changes this year. I’m tired of seeing you lazy slackers taking Vegas vacations while I work my ass off and can barely play my PS3. Atlanta, Philly, and Chicago are definite trips. Phoenix and Boston are also on the agenda as possible runs. It’s time to Live. However, I need to complete a couple of the previous tasks to get to this point.

5. Impose my Will on Life (5): Of all things to get a 5 rating, it would be this. For too long, I have been too passive when it comes to situations dealing with my money. So as we roll through 2011, the bullshit stops. From this day forward, there’s no such thing as “doing it for the love“, aka working for free. I’m done with internships that don’t pay. I’m done with people who want me to put in the work but start sweating when the question of money comes up. If you aren’t paying, then keep it moving. #TheF— I look like!? If it means I alienate people, then so be it. To hell with you. Expecting me to work for free is one of the highest forms of disrespect and I’ll be damned if I’m disrespected. Furthermore, I am going to become a lot more of an a-hole than I already am. I have fallen victim to too many people taking me for a joke and thinking that they can get over on me because I’m a nice guy. This will come in the form of those who serve me no purpose being dropped from my circle. Unlike a lot of you, I don’t spend my time on Facebook and Twitter whining about fictitious “haters” and people who are out to get me. I just drop your sorry ass.  I owe you no explanation. You’re done. The reason this gets a 5 is because old habits die hard. Not working for free is easy. Dropping some people will be extremely tough. Others, not so much.

That’s what I can think of for now. That’s the great thing about goals, there’s no timetable on when to set them. When you get to the end of the year, it’s time to do some inventory on what you have done and what you will do. Resolutions are just wishes. Goals are plans of actions. So in 2011, what is your plan of action? What are YOU going to do to make your life better? What are you going to DO to get to where you need to be? Regardless of how it was, make 2011 better than 2010. If you plan accordingly, you can do it. Best wishes to you in 2011. Rest In Peace to those we lost in 2010. Let’s handle business in 2011. No more New Year’s “resolutions”. Happy New Year!

The 37th day since the Detroit Lions’ Last Loss!

One Comment on “Goal Tending: The 2011 Game Plan of Success…”