The difference between stupidity and genius is that genius has its limits.
— Albert Einstein

LAKEWOOD, N.J. (JSC) — It’s that time once again. It’s time for me to get some things off of my chest. I do this every so often and there are three things that I have to give a couple of thoughts on. The theme for this brain dump is all things bad. Whether it’s the bad karma that Tom Brady is carrying around right now, the horribly bad breaks that one of my favorite professional wrestler keeps running into, or the all around bad karma that one of the world’s worst people continues to have following him around after he got away with murder. As always, these are my opinions and mine alone. Any objections that you may have, you can take up with the Law Offices of Sit & Spin. No need to drag out this intro. Let’s Go.

“Violence does, in truth, recoil upon the violent, and the schemer falls into the pit which he digs for another.”
— Sir Arthur Conan Doyle

So, George Zimmerman, everyone’s favorite gun-toting sociopath, got shot yesterday. It was initially thought to be a road rage incident that escalated out of control but it turns out that this may have been yet another case of Zimmerman picking a fight with someone except this time, the person he started shit with was armed. We all know about what made Zimmerman most infamous. In 2013, he officially got away with the murder of 17-year-old Trayvon Martin. Since then, it seems as if every few months, this breathing piece of excrement makes the six jurors who acquitted him look dumber by the second. Seriously, if you got away with murder and gained infamy across the nation, wouldn’t you do your best to keep a low profile and stay out of the limelight? Wouldn’t you, if you had a stitch of decency or common sense, try your best to avoid confrontation? You wouldn’t beat up girlfriends or their fathers, right? You wouldn’t try to get on Celebrity Boxing, would you? You sure as shit wouldn’t repeatedly go on TV and claim that it was “God’s Plan” for you to murder a 17-year-old boy, WOULD YOU!!??? Not this guy! Even worse, after every incident, he still manages to avoid punishment. He’s managed to fashion this idea that he’s untouchable.
The difference in this incident and the others is that it turns out that this guy who shot him had beef with Zimmerman. Apparently, Zimmerman threatened this dude months ago, including saying “Do you know who I am? I’ll kill you!” then brandishing a gun. Yesterday, dude apparently sought some payback, caught him out on the road, and ended up busting off a shot through his passenger side window. Zimmerman, amazingly, did not die in this incident, a fact that wasn’t exactly lost on Twitter:

You gotta be a whole demon when you get shot in the face and people are LIVID you didn’t die. *Looks at George Zimmerman*

I really don’t care how this sounds but I’m really disappointed that George Zimmerman didn’t get fatally wounded. Like just die already. — Shaquille Sunflower (@AisforPooty_) May 11, 2015

That man will NEVER know peace. Clearly. Peace is all “Who is George Zimmerman? No, I don’t know him.”

There were hundreds more like this, each of them to varying degrees ranging from hilarious to downright cruel. The thing is — and far be it from me to ever publicly wish death on someone, even if it’s a vile piece of trash like Zimmerman — NOBODY FEELS SORRY FOR HIM. And truthfully, when you carry around the amount of bad energy that he will carry the rest of his miserable life, I doubt anyone with a soul will cry a single tear for George Zimmerman.

I would prefer even to fail with honor than win by cheating.
— Sophocles 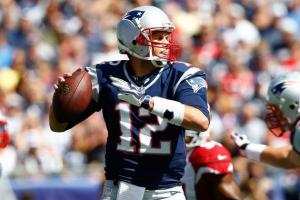 I got to see Tom Brady play in person once while he was in college at the University of michigan. It was Oct. 9, 1999 at Spartan Stadium in what was — at the time — the loudest, most volatile and nasty MSU/michigan game I’ve ever attended in person. The Spartans won that game 34-31, but it would’ve been a blowout if not for Brady. At that time, U of m head coach Lloyd Carr had a bizarre platoon system at QB going between the incumbent Brady and hot shit freshman Drew Henson. I know. Yep. Tom Brady was splitting time with Drew Henson. You and I both see how ridiculous that was now, but in 1999, that was a thing in Ann Arbor! The Spartans, behind Plaxico Burress going Super Saiyan on the michigan secondary, had sprinted out leads of 27-10 and 34-17 before Brady led a pair of late touchdown drives and the Spartans need a late stop to hold on for the win. We all know how this eventually ended. Brady went from being a 6th round pick to an iconic QB while Henson eventually quit the Wolverines to lead a failed career with the New York Yankees and eventually a failed career in the NFL.
Well, yesterday, Brady was suspended for the first four games of the 2015 season for his hand in the nauseatingly annoying “Deflategate” scandal. To be honest, I initially thought this entire thing was a case of the Indianapolis Colts being sore losers after getting their asses kicked by the Patriots in the AFC Championship Game. But as this thing just lingered on, it took on a life of its own. This entire thing has led to five months of every major news outlet in the country talking about balls.
Do I think that deflating an extra pound per inch out of a football is a major issue? No. I honestly don’t. It’s no different from what pitchers and catchers have been doing to baseballs for 150 years. Hell, every QB i the NFL does it now. The reason this is a big deal is because it’s Brady. The golden boy. The only grown man who can wear Uggs in this country and not have his manhood questioned. He’s won four Super Bowls and is two crazy catches by the New York Giants from having six rings. It’s because it’s the Patriots who have been getting over for nearly 15 years. The biggest mistake Brady made was not doctoring the footballs, but being a dick about it. The Patriots will take a hit for this, and it may even cost them a playoff spot. But knowing them, they’ll use this as a chance to showcase that backup QB and find a way to get those two draft picks back.

Wrestling is therapy. No matter how bad my personal situation is, when I step into the ring, all my troubles disappear. My baggage stays in the back where it belongs.
— Eddie Guerrero

My three favorite wrestlers of the last five years have been Brock Lesnar, CM Punk, and Bryan Danielson, b.k.a Daniel Bryan. Punk, after winning multiple world titles and becoming the hottest wrestler in the game, quit pro wrestling the day after the 2014 Royal Rumble and signed with the UFC late last year. Meanwhile, Danielson fought for more than a decade to get to WWE, won the World Heavyweight Championship only to lose it in 18 seconds at WrestleMania 28. The dude developed a massive cult following to become the most over dude in the business. For God’s Sake, those “YES!” Chants that the Spartans adopted were thanks to Danielson.

After he won the World Heavyweight Title at WrestleMania 30 last year, he suffered neck and elbow injuries during a match with Kane and ended up missing eight months, forfeiting the title belts. While he strangely returned in December (something I wouldn’t have let him do), he jumped right back into the fray with reckless abandon. Ideally, I’d have booked him to come back in the Royal Rumble (unannounced) at No. 30 and win the damn thing by eliminating Roman Reigns last. He’d have defeated Reigns at Fastlane, then had a match for the ages against Lesnar at WrestleMania 31, complete with this, and have it end the same way with Seth Rollins cashing in and stealing the belt.

Instead, Danielson came back too soon, was eliminated WAY too early in the Royal Rumble, but eventually won the Intercontinental Championship in a ladder match as a consolation prize. However, he managed to aggravate the injuries he suffered last year and last night, he did this:

Well…that sucked. Unlike the other two guys I’ve talked about in this blog, this guy deserves better and hopefully he’s not permanently done. My guess is that he’s gone for the rest of 2015 and will return at next year’s Royal Rumble. In the meantime, it would be cool if someone — ANYONE — grabs that role as being the best in the business. I like Rollins as a smarmy, chicken-shit heel World Champ. However, while Lesnar is gonna eventually get his pound of flesh, there needs to be that next guy. The question would be whether that guy is currently on their roster, on NXT (ie Sami Zayn, Devitt, Hideo “KENTA” Itami), or are they elsewhere. I’ve been a wrestling fan since I was 5 and it’s never been tougher to follow it than right now.

In closing, thanks again for the continued support of this blog. The Podcast will be coming in the next 10 days and look for more stuff like this and then some. Continue to strive for success in whatever you do, and understand that as long as you have the right attitude and work your ass off, Success Is Certain.