What’s Up y’all! If you’ve followed me on Instagram the last couple of months — and you should be — usually every Friday, I post some inspirational quotes and pictures to send

y’all into your weekend with a little extra juice. Often, it’s stuff I’ve heard to get me through rough stretches. Occasionally, it’s some inspiration shit I thought up on my own after taking time to reflect on my run through life.

Well, starting today and going every week from here on, I’m going to be hitting y’all with some of that inspirational food for thought that only I can give you. It’s the JSC Words of Wisdom, a.k.a. #JSCWOW.  You can follow me on the Gram to peep the previous ones like this one to the left. For the inaugural (on the web) #JSCWOW, I give y’all a simple message: Pay It Forward. 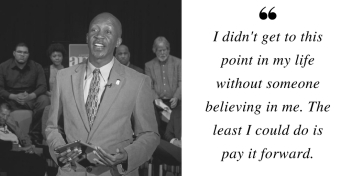 I have been fortunate enough to have somehow made it to 37 years old, working in a field where, for it all of its errors, faults, and BS, I’m able to make a discernible difference in people’s lives. I always think about who helped me (and who didn’t) along this long, winding, unfinished path of mine and I feel drawn to help others. It’s often why I’ll make it a point to look out for someone. I do a lot of work with high school and college students (oy…I’m old enough to be that guy) who want to get into journalism or broadcasting or are simply having a tough go of things. I’m always available to read over stuff or listen to stuff or toss an assist out there if I am able to help. The reason I do this is not to put myself over or make myself feel good — even though watching them succeed does just that. It’s to simply do for others as was (and wasn’t, in some cases) done for me. I was taught by Jesuits for two years — What up doe, University of Detroit Jesuit Academy — and they live by the motto “Men For Others.” I’m a member of Phi Beta Sigma Fraternity, inc. (G.O.M.A.B. Σ). I was raised in a home where my mother will treat you like family on sight. Seriously. She will ask you if you’re hungry and try to throw a plate together. It’s just what we do. Service is in my DNA.

When I started 9th grade at Detroit Renaissance High School in 1993, I ended up in a journalism class. I was completely unsure of what I wanted to do in life, and at 14 years old, you were normally supposed to have some semblance of an idea — at least back then. The teacher was a woman named Gail Jones. She was, in all honesty, the first teacher (who wasn’t my mom) to REALLY stoke that fire in me to chase the journalist dream. She encouraged and pushed me to take a stab at an high school apprenticeship at the Detroit Free Press in 1995, which yielded my first professional paycheck at the age of 16. She encouraged me to get into broadcasting when most people were too busy making fun of these pipes of mine. She was a Michigan State Alum and was in my ear about getting to East Lansing and gave me the biggest hug when I was accepted there in Feb. 1997.

I don’t get set on this path without Mrs. Jones in my ear — and, occasionally, up my ass — about being better. She had my back. The least I can do now, some 24 years later, is have yours.