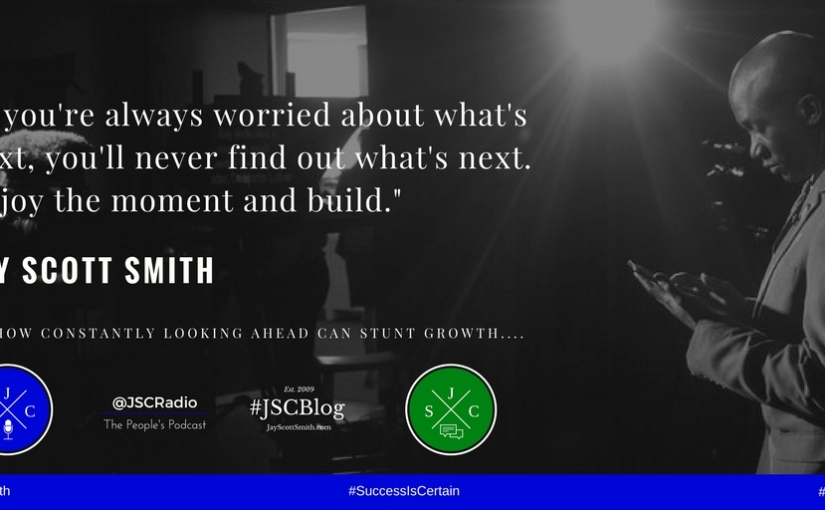 Good Friday morning, Everyone! It’s time, once again, for the JSC Words of Wisdom, a.k.a. #JSCWOW. Reminder, This will drop every Friday morning, more often than not, at 6:00 am Eastern Time. Feel free to share this on your favorite social media outlet with the hashtag — #JSCWOW.

For this week’s Edition, let’s take a moment to reflect on where you are now. Looking ahead is fine, but don’t let the next thing keep you from getting to the next thing: Patience is a Virtue.

One of my biggest assets — and liabilities, to be honest — is that I’m notoriously impatient. I’m not nearly as impulsive as I was as a teenager and a college student, but I’m all about “Let’s get this shit done. Like…Yesterday.” I’m also all about efficiency. I need things to have some rhyme or reason. Nothing irritates me more than doing things that don’t make sense just for the sake of doing them. Why go west, when common sense says go east? The thing about that approach is that it often leads to “What’s Next?” or “Who’s Next?” #NoGoldberg. This is a very Keep It Moving society that we’re in right now and that often doesn’t lend much to reflection on what you’ve done or a measured look at what to do going forward. And that’s actually a problem and it often leads to stagnation that masks itself as forward momentum.

I sit here now, some 12 and a half years since I first set foot in WQHH in Lansing, and I have found myself looking back at all the stuff I’ve done and it’s really a lot in retrospect. The problem is that I never thought much of it at the time because I was so addicted to the Chase. A couple of months ago, I was talking to one of my really good friends in the industry. She’s been incredibly successful and has the type of professional resume that most people would kill for. I know I would pull out a blade and ski mask to get where she’s been — and I’ve told her this.

During this particular conversation, she seemed so hung up on “What’s Next?” and didn’t seem to think she had accomplished all that she wanted in the way she wanted. She’s working on multiple projects while simultaneously looking ahead to something else and the magnitude of everything she’s doing is just flying by the wayside. In the midst of this, I blurted out “If you’re always worried about what’s next, you’ll never find out what’s next.”

(Aside: This is what often happens. I’m no motivational guru. I don’t sit here and look at cat posters and think up these existential things. I tend to just say some amazingly profound shit right off the dome and then sort it out later. That’s where my impatience/impulsiveness is a virtue.)

After dropping that unexpected gem — it shocked the hell out of me, too — she stopped and kinda took an inventory on all the amazing work she’s done. The thing about it is that you cannot get hung up on what’s next all the time. Just like you can’t spend all your time lamenting past failures or putting over past accomplishments. You can’t “chew yesterday’s breakfast” as former Detroit Tigers manager Jim Leyland would often say.

“You can’t chew yesterday’s breakfast. The game is over. They beat us.” – Jim Leyland

Don’t get me wrong. There’s nothing wrong with looking ahead to what’s next. That’s called planning. That’s cool. Just don’t get consumed with it. I spent the better part of a decade worrying about the next gig, often not long after I just started a current one. I was in Lansing already thinking two moves ahead. Same with when I was writing for TheGrio. That works in Chess, not as much with your career. Every so often, take a few minutes to look back at what you’ve done. Not in the self-aggrandizing “Look at Me!” way, but in a “Damn, I’ve done a lot” way. Obsessively chasing “What’s Next” will leave you feeling unfulfilled in the short term and hamstrung in the long run.

Going forward, take stock in what you’ve done and how to improve your current situation. If it’s really an untenable one, don’t hesitate to look ahead. Just don’t allow it to consume everything you do. Remember, your road to success has not ended. It’s only just begun.