After last weekend’s look at how keeping your internal Heat in check, this week, as we embark on 4th of July week, I head in the other direction and give y’all a quickie on something that will also help keep the anger and disappointment down and help push you toward a successful run in all aspects. It’s time we looked out for ourselves a lot more.

Those of you who follow my podcast — and if you’re on this site, I’m assuming you do! — have noticed that in the last month, I was a big fan of what Kevin Durant accomplished as the Golden State Warriors regained the NBA Title. One of my main sticking points about this ridiculous amount of foolish scorn heaped upon him was that his leaving Oklahoma City was about HIS happiness and doing what was best for himself both professionally and financially. He bounced on a “comfortable” situation in Oklahoma City — one that he could’ve just been content to rest on his laurels and “stuck it out” to make a bunch of fans happy — to be bold enough to do something that would be deemed everything from unpopular (fair), to “cowardly” (what!?), to “disloyal” (HA!) by those who have never been a position to make their own life decisions on a scale such as that. One of the things that truly stood out about his decision to go to a far better — but not perfect — situation (again, they were coming off winning 73 games but LOSING the title in a colossal choke job), was his defiant insistence that he was doing it to make himself happy.

You can see it here in this comment he made shortly after Golden State won Game 5 and the title two weeks ago. He told USA Today what it felt like to be a champion. Put aside the fake machismo nonsense about him being “disloyal” and this stupidity about “he didn’t earn it!” (he very clearly did) for a moment and think about what it’s like to feel like this. Have you had a moment in your life where this is how you felt about your life, your job, or your marriage?

It’s just the feeling … it’s just like a boss, man. It’s not like when you run into an amusement park as a kid you see endless rides and are in the amusement park all day. It’s more like let me go home in my nice car and smoke a cigar while I lay my feet out with the fire, you and the fire pit with a glass of wine, let me just sit back. That’s how it feels. I’m sure you guys can relate to having a nice nightcap. That’s exactly how it feels. 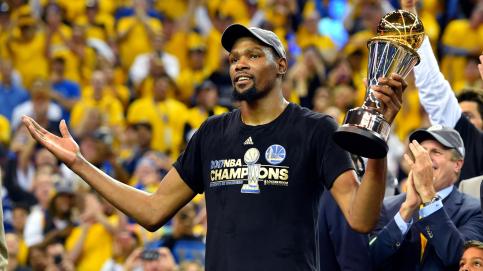 That doesn’t sound like a man who regrets picking up his life and moving to a new situation. That sounds like a man who made the best decision for himself and is living HIS best life. Stevie Wonder can see what I’m getting at. We’re all adults here, and we often get faced with a myriad of decisions about where to go, what to do, how it will affect us, why we’re doing, and who we’re doing it for. Far too often, however, we let the latter question subconsciously hold more weight than the other four.

Nearly three years ago when I picked up my life and everything I knew — which at that point had been 35 years in Michigan and never having lived more than 90 miles from my family in Detroit — to move my ass to New Jersey for a job that would take pleasure in firing me five months later, I did it because it was something I had to do. I did it for me. Did it turn out as swimmingly for me as it did for KD? Obviously, no. But the thing about that is that I had to know. I had to find out for myself. I could’ve worried about the trepidation my parents had or the worries of what few actual friends I had in Michigan thought. I could’ve foolishly remained “loyal” to a job that will fire me on a whim and claim they’re doing it to strengthen their company. Going the “safe” route and sticking around — being “loyal” to a decent situation instead of making the leap for a better one — might make other people happy and might please the masses in the short term. But WTF does that do for YOU? At the end of the friggin’ day, YOU are the most important thing in your life. YOU have the most direct effect on YOUR success. So what are YOU gonna do?

In closing, this week is all about taking care of the home team. That means you! Everyone isn’t going to like every decision you make. As one very astute young woman tweeted earlier this week:

Being an adult just means always letting someone down.

It also means, often, pissing them off. No one is going to like every decision YOU make about YOUR life. But the main thing is that YOU like the decision YOU make. Take risks. Take chances. Make moves and Go Forth Boldly into the Night. Because at the end of the damn day, YOU are the biggest creator of your own success and YOUR check still clears regardless.

JSC Radio will return in two weeks on July 13. Have a fun, safe, and relaxing 4th of July week here in the United States. Big Ups to the rest of you reading around the world.