JSC Radio Extra: A few minutes on R. Kelly and how we treat Black Women…

PHILADELPHIA (JSC) —  What’s up, Y’all. I know. It’s not Thursday or Friday. This ain’t #JSCWOW. Instead, I’m here to highlight a particular point I made in last week’s episode of JSC Radio. For those of you who have listened: THANK YOU. For those who haven’t, get your ass onto Soundcloud, iTunes, Stitcher Radio, or Google Play and subscribe now.

During last week’s episode, which was the 45th, I dug into the archives and played part the audio from the Feel The Hunger Radio episode DJ Cutt-Nice and I did the day R. Kelly was acquitted in 2008. At 28 years old, I was more incredulous at how it happened. At 37 years old, I’m livid that it’s continued on and that boiled to the surface after I played the cut from 2008. Today, I’ll give you the transcript of what I said.

On last week’s show — which was taped on Thursday and dropped on Friday afternoon — I went right after R. Kelly.  I laid into Kelly’s continued victimization of young women and girls, as evidenced yet again by the exceptional and disturbing Buzzfeed piece by Jim DeRogatis that came out last Monday. Most sane people would agree that Kelly is a garbage human that skated in that trial in 2008 when the judge refused to allow essentially any of the pertinent evidence to be presented to jurors — including that minor detail (no pun intended) that he MARRIED AALIYAH WHEN SHE WAS 15 AND HAD PAID MILLIONS IN SETTLEMENTS TO FAMILIES OF UNDERAGE GIRLS — and he got over because of his fame which is just as gross when a Black man gets over as it is when a white person does.

Often when I record these podcasts, there is no hard script. I usually go in with a set of bullet points and a few internal cues. Aside from that, it’s basically me and any guest I may have just free-styling it and shooting the shit. As was the case last week. I went in with bullet points and mental cues, but after the FTH cut ran, it’s like something hit me and I felt compelled to lay out my level of disgust with how we, as black people, have allowed monsters like R. Kelly and countless thousands of other non-celebrities victimize and exploit Black women and girls.

It’s the years of enabling and excuse making. It’s looking the other way when some clearly terrible things are happening — whether it’s R. Kelly marrying a 15-year-old celebrity or a family member forcing you to give a hug to that that “uncle” that you know shouldn’t be around kids. You can hear the entire show down below, or on one of the aforementioned outlets, but this particular monologue that, again, I did not script out, begins at the 22:43 mark of the show and goes about six minutes until the close of the segment. I felt this needed to be reiterated one more time because we are all responsible for our women and girls and letting people like R. Kelly and others slide because they “make good music” or out of some perverse racial pride is unacceptable under any metric. We begin just after I played the 2008 Feel The Hunger Radio cut: 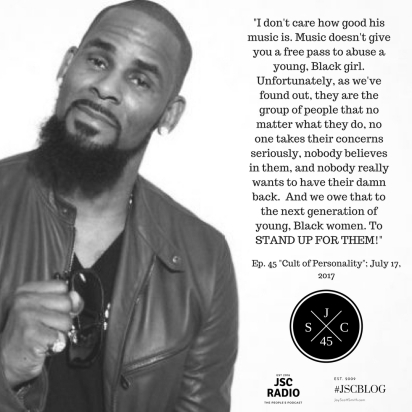 You want to know what I’ve been hearing the last few days? It’s not ‘My God. We finally understand what kind of a scumbag he is!’ or ‘We already knew. A lot of the stories have been known for almost a quarter-century.’ What I’ve been hearing is something very similar to the same crap I was hearing about Bill Cosby. A lot of the same silly crap I was hearing about the guy we’re going to talk about in the second half of this show — Michael Vick. About the silly crap from Chris Brown and every single black male celebrity who does something stupid.

WHY IN THE HELL WOULD YOU WANT TO GIVE A PASS TO SOMEBODY MOLESTING YOUNG GIRLS!?

Ain’t nobody’s music that damn good to look past that! And, yes, history has had a lot of problematic people. History’s had a lot of very talented, exceedingly problematic people. Roman Polanski, Michael Jackson, Jerry Lee Lewis, and Johnny Cash, and Elvis Presley. We can knock these things down over, and over, and over again. There are a lot of people who are extremely talented. But I don’t give a damn how talented you are. I don’t care what kind of albums you make. I don’t care if you’re the so-called “King of R&B” or “The Pied Piper of R&B.” …The dude called himself “The Pied Piper” for GOD’S SAKE! Just go read what The Pied Piper was!

He’s been laying a trail. He’s been crying out for help. He’s been crying out to be caught for 25 years, and all y’all care about is when’s the next single and when’s the next concert so we can put on some ugly white linen outfit and go 2-step in the night in the summertime. Y’all make me just as sick as R. Kelly. Because we’ve raised a generation of people that basically wants to give free passes to everybody. That has talked about how fame somehow makes you exempt from things. Or you shouldn’t be punished as harshly for things. Hell, O.J. Simpson — who just got out on damn parole — took advantage of that.

[The Buzzfeed story] talked about R. Kelly starting up a cult, but there’s always been one cult that surrounds dudes like R. Kelly, and Bill Cosby, and Michael Jackson, and Chris Brown. It’s that Cult of Personality. No, I’m not talking about Living Colour and no, I’m not talking about CM Punk. It’s that cult of personality that surrounds fame. It’s that cult of personality that’ll let you somehow let someone who is highly charismatic; who can talk a good game; they’ve got that gift of gab or they’ve got that charisma or whatever, that you let them get away with some of the most heinous, ridiculous things ever. And it doesn’t make a difference what your race is. It doesn’t make a difference what your nationality is. A scumbag is a scumbag. And R. Kelly? I don’t care if those girls are 25-years-old or 35-years-old, you’re a scumbag. And if you wanna make excuses for R. Kelly, you’re a scumbag too.

I’VE HAD IT. I’ve been talking about this fool for 15 years at least — no, TWENTY years, really — of him being a complete and totally terrible human being. Can we NOT be terrible? Can we NOT do this anymore? Can we FINALLY hold somebody to account for being a scumbag? Because that’s what he is.

I don’t care how good his music is. Music doesn’t give you a free pass to abuse young, black girl. Because, unfortunately as we have found out, they are the group of people that no matter what they do, no one takes their concerns seriously; nobody believes in them; and nobody really wants to have their damn back. And we owe that to the next generation of young black women to STAND UP FOR THEM instead of victim-blaming, and shaming them, and trying to find loopholes to let someone get away with abusing them and mistreating them!

In closing, we’ve gotta do better for our girls and women. We need to treat their cries for protection and justice with the same fervor and aplomb that we treat young (and old) black men being harassed and killed by police and vigilantes. If we won’t just wave off an acquittal of a killer cop, why are we willing to wave off and gloss over the victimization of our women and girls. And if you’re a black woman who has been victimized or know someone who has been, you’re not alone out here and there are people who have your back. Let’s do better and stop the culture of fame worship that makes lesser men and women of us all.