NEW ORLEANS (JSC) —  What’s up everybody. The push to Episode 50 continues after a brief hiatus. First and foremost, my apologies for being gone the last few weeks. I was down in New Orleans for the National Association of Black Journalists Convention — it was an amazing success BTW — but after three weeks, the People’s Podcast is back in business and just in time for more of the fresh hell that has engulfed this country.

Episode 47 talks about the terrible incident in Charlottesville, and the fallout from it that includes the perversion of “Free Speech” and this country’s continued clutching onto the Confederacy — you know, the LOSING side in the Civil War. The latter being a subject that is sadly familiar to this site. 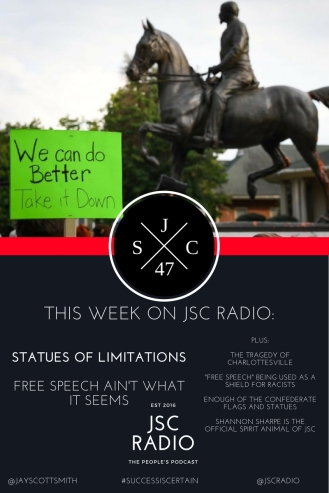 Coming up on Episode No. 47 of JSC Radio:

If you’re a hungry, grinding ass hip-hop artists and you want to get your music on on JSC Radio, e-mail me directly at: jason@jayscottsmith.com. To support the show and the website, check out our Patreon Page for Exclusive JSC Stuff for Patrons Only.

I want to thank those of you who continue to support JSC Radio and continue to help this show grow day by day. Feel free to support this show by subscribing, sharing links, giving me a rating and a review on Apple Podcasts, Google Play, and/or Stitcher and telling others as I continue to build this thing.

One thought on “JSC Radio Ep. 47: Statues of Limitations”