PHILADELPHIA (JSC) —  What’s good people! So, somehow, we made it to 50 Episodes — FIDDY! — of the People’s Podcast. But this one is going in a completely different direction from the rest of them.

For the first 49 shows, most of them have had some kind of intro or compelling hook or fun tag. This one’s a stone cold commentary that goes back to my roots. It’s threefold. I’m defending my friend (Jemele Hill). I’m defending my chosen profession (journalism) and I’m defending my people from the silly scourge of “#StickToSports.” The idea that “sports is an escape from everyday life” is a laughable lie. The thought that we have to “keep politics out of sports” rings hollow when most of the major sports stories of the last 100 years have been “political” in nature — Jackie Robinson, Muhammad Ali, John Carlos & Tommie Smith, The 1972 Munich Olympic massacre, The 1980 Miracle On Ice, etc. — and have shaped the face of sport around the world. To say otherwise is intellectually dishonest and disingenuous.

So here’s Episode 50. A commentary that refuses to #StickToSports. 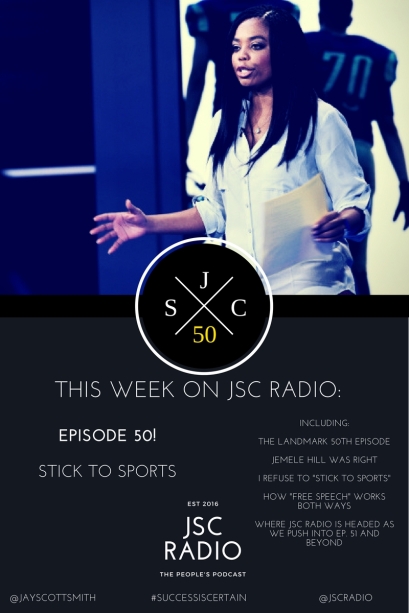 Coming up on Episode No. 50 of JSC Radio:

If you’re a hungry, grinding ass hip-hop artists and you want to get your music on on JSC Radio, e-mail me directly at: jason@jayscottsmith.com.

To support the show and the website, check out our Patreon Page for Exclusive JSC Stuff for Patrons Only.

I want to thank those of you who continue to support JSC Radio and continue to help this show grow day by day. Feel free to support this show by subscribing, sharing links, giving me a rating and a review on Apple Podcasts, Google Play, and/or Stitcher and telling others as I continue to build this thing.