PHILADELPHIA (JSC) —  What Up Doe, people! We’ve reached another landmark — Episode 55 (FIDDY-FIVE!) — and this one is once again dedicated to my alma mater, Michigan State University.

Spartan Football has had a roller coaster ride the last two years to say the least. As we discussed back in Episode 40, the school as a whole has been through the ringer with issues — a number of which of their own doing — and it was compounded by the football team hitting rock bottom last year after having the program’s best season since 1966. The off-season saw five starters booted from the team due to legal issues and personality conflicts and they were gleefully written off by everyone — particularly in Detroit — as no longer relevant.

Well, the boys are back, and on a redemption tour that is on the verge of epic. MSU Quarterback Brian Lewerke is even out here talking a little spicy:

We discuss MSU Football, plus a litany of other fun stuff this week on the People’s Podcast. 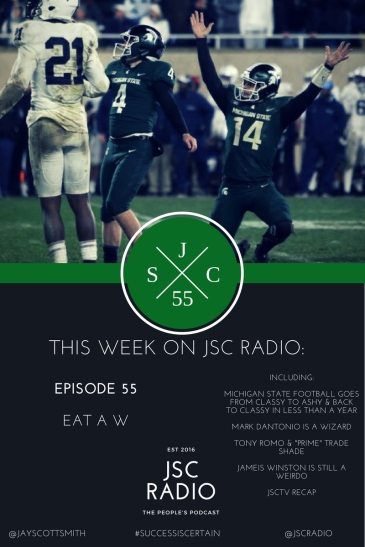 Coming up on Episode No. 55 of JSC Radio:

If you’re a hungry, grinding ass hip-hop artists and you want to get your music on on JSC Radio, e-mail me directly at: jason@jayscottsmith.com.

Be sure to also check out Jay Scott Confidential on RVN-TV every Saturday at 12 Noon EST.

To support the show and the website, check out our Patreon Page for Exclusive JSC Stuff for Patrons Only.

I want to thank those of you who continue to support JSC Radio and continue to help this show grow day by day. Feel free to support this show by subscribing, sharing links, giving me a rating and a review on Apple Podcasts, Google Play, Audioboom, Chorus, and/or Stitcher and telling others as I continue to build this thing.